The True Story of a True Hero

Decades ago Sergei Dimitriov was part of a secret Soviet manned space program named “Zvezdnyy” (starlight). His mission was the inflight surveillance of the newly developed soviet rocket engines.
Propeled by a newly developed high thrust rocket engine, these things reached their top speed in less than a third of the time it used to take the american ones back then. They also left and enterd the earth’s athmosphere without any problems, circling around the moon 4 times in total.
All his 6 flights were a full success and Sergei’s walls became covered with medals and honoring certificates. 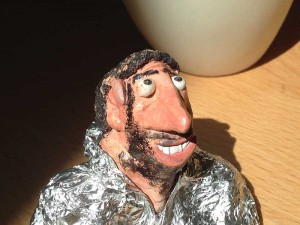 On July 16th 1969, when it became clear that the US were on the final stretch of their ’61 promise, Dimity Ustinov, aka Uncle Mitya (a powerful Kremlin bureaucrat supervising the rocket industry) gave green light to an emergency mission to save Russia’s glory: Putting a human on the moon’s surface before the Americans.
Although the techies weren’t too sure about the functioning of the “Little Bird” landing module, let alone getting it back up, a Starlight rocket was equipped with it as a precautionary measure. And on this July 16th it was the right time to use it.

Knowing that this could end in a disaster, shortly after the takeoff the crew decided to try another route kinda like “where no man has gone before”…
Thanks to their incredibly fast thrusters and superb maneuverability they reached the moon’s orbit before the Americans and went into a parking position behind it. When Apollo 11 came up, they had a chat, explaining that they could beat them in the race, but weren’t sure if they made it back. So they decided to play a short quiz game and whoever won got the right to land first. Just shortly before the end of the out-of-contact period of Apollo 11 the Americans won by beating the Russians on the number of cereal brands available in their stores.

With what looked like a good outcome for everybody (except for uncle Mitya), it was agreed that no word was ever to be told about this.
And the rest is history.

Sergei was honorably dismissed from the program and from then on lived in a small village near the Baikonur Cosmodrome.

Whenever a spacecraft now leaves the spaceport, he dusts off his old space suit and sits on his front porch with a good glass of Russian Grain, following the rocket’s trail until it blends in with the sky.