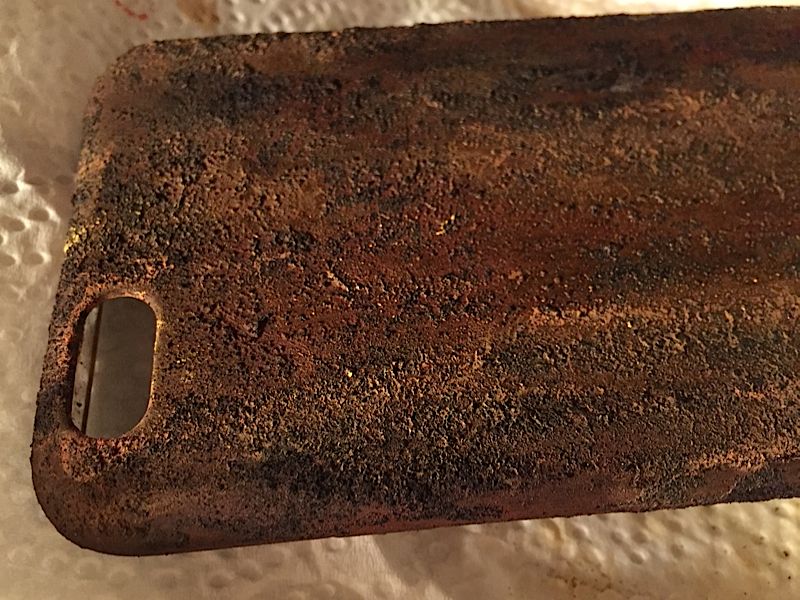 A new iPhone means a new case. The quest for the perfect rusty case goes on…My last cases were already trying to imitate a rusty, worn surface with more or less success, so i decided to give the real thing a go.

First I got my hands on a transparent TPU case, which then was painted with Grey real metal paint. That stuff is used mainly to underpaint surfaces which are used as magnetic boards. Next I sprikled some of the paint with ground cinnamon, clove and nutmeg to get the grainy structure and dabbed that on the still wet metal paint base.

Once it had thoroughly dried, I applied Modern Masters rusting solution and let it rust in peace. Followed by some more rusting solution an various areas, to make it look less uniform. Check out the gallery below for some details.

Man, that thing looked rad, and it also smelled great 😀

Turned out that my worries about having a metal coated case were real… The reception of my phone was pretty shitty, to say the least.
After twisting and bending the TPU case vigorously I had most of the rust off. Now it still looks vintage/abused, though it’s a far cry from what I had in mind, therefore there are no pics of it in its final state.

At least the reception is good again, and the case still does a good job at protecting my phone. Funny enough it still does smell great, kinda like gingerbread.
Looks like I gotta do another one though…