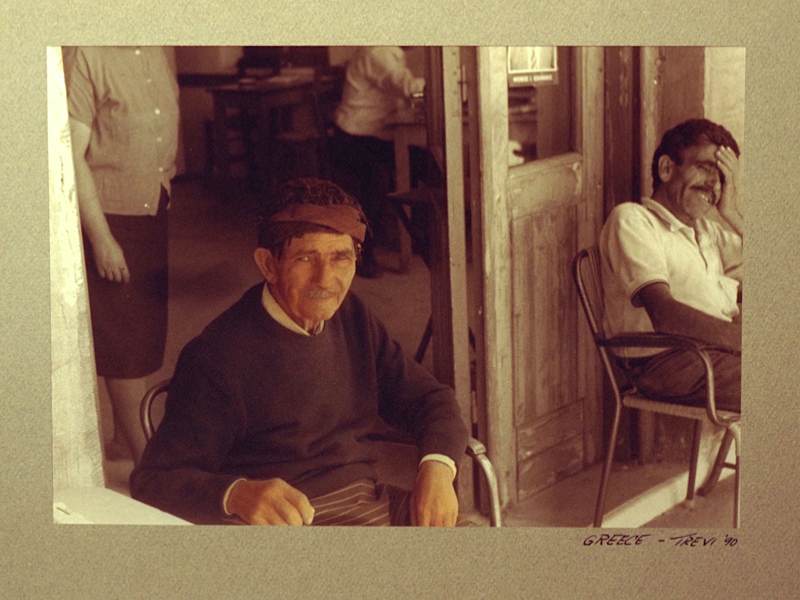 I took these pictures on the island of Crete in Greece in 1990.

We toured the island with a 600cc one-cylinder four-stroke Yamaha XT 600 Teneré bike. A great ride, btw, like a Harley without the 2nd cylinder but with double the maneuverability.

When we arrived at a tiny village in the mountains of Crete, we set out to take a rest and get some coffee at the local restaurant. There were these old guys sitting in front of the restaurant. When I dug out my basic Greek sentences and fluently ordered a Greek coffee with sugar and a “nestle” instant coffee with milk and no sugar at all, they were so pleased that they started talking to me instantly.

Tough luck that I only knew to speak so much Greek, though we got along quite well with some additional Italian, English and hand signs.
It didn’t take long and we had some dishes with fresh almonds on our tiny table, and then they brought out their home-distilled Ouzo, an anise-flavoured clear spirit. Gee…

While we were communicating in one way or the other, I was struck by the beauty of their weathered faces. They looked wise and full of knowledge from decades of living in this very rural village.

I couldn’t resist trying to keep this moment in time and took a picture with my old Yashica SLR (thinking of it, I shouldn’t have sold it…).
As you can see, we had a great time! Guess it wasn’t very common that they got asked to be photographed.

Back home I had the black and white negatives developed and blown up to 20x30cm. Then I hand colored them with egg-white glaze like the photographers in the early 1900s did. 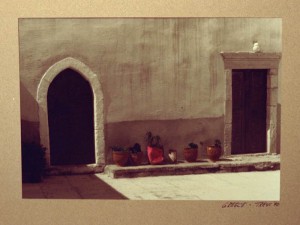 Back then I just had gotten a rare 1920s German airbrush from an old photographer in Zürich who closed down his shop when he retired. With this I colored some parts of the images to make them stand out. Check out the post about this airbrush here (opens in new window tab).

If you’ve never heard about that kind of color, here’s an excerpt that boils it down:

“An egg-white glaze is used to color the photographs, resulting in the glaze penetrating the photographic surface without leaving behind any traces of its application. The artificial coloration of the photographs brings about a loss of reality in the representation, which seems too brightly lit, synthetic, and hence unreal,” Karin Moos wrote in 2000 in a text for the exhibition catalog “100 Masterpieces” .

I really love the effect this has.

Unfortunately most of the other images have disappeared with time. There were loads of backyard shots with rusting-away trucks or motorbikes which also looked great with this subtle coloring style.