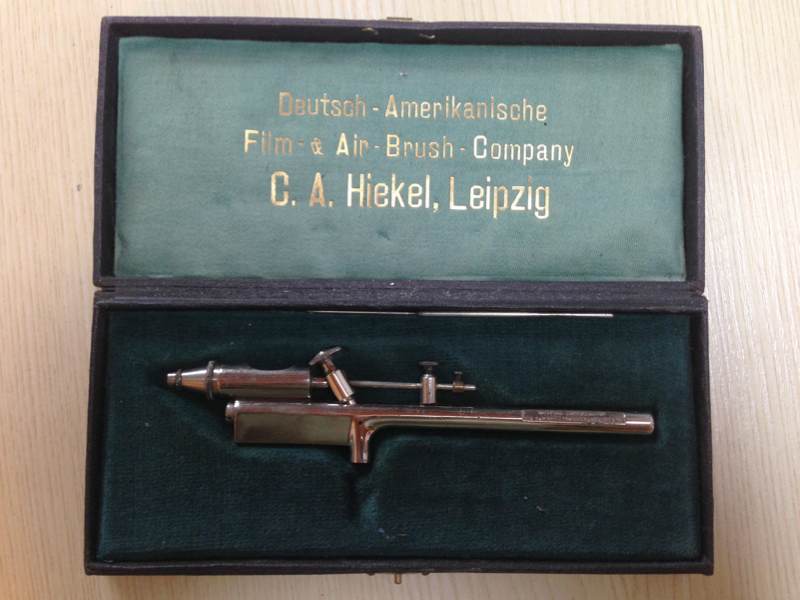 One of my favorite airbrushes is this single action top loader made by C. A. Hiekel in  former East Germany (DDR) before it was the DDR 🙂

I don’t know the exact year when it was made, but I found out that by 1908 there was a phone book entry in Leipzig with the company name of “Deutsch-Amerikanische Film- & Air Brush Company C. A. Hiekel”. 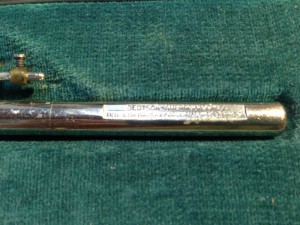 After WW II the name was changed to “Hiekel”, leaving out he American part.
So this brush must have been manufactured sometime between 1908 and 1945. From what I found on pictures on the Web, it is more likely to have been built towards 1908 than 1945. That was back when their boxes looked like this: 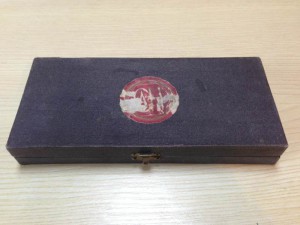 I bought it from a Photographer in Zürich (Switzerland) who closed his shop because he went into retirement. He used it to tint black and white photographies with egg white color.  This color reacts excellently with the photographic paper. The paper sucks it right in, and when it has fully dried, there are no borders or structure changes visible (when done right)

I was so much fascinated by this technique that I did a big series of colored b/w images, but unfortunately most of them have been given away or got lost during one of my relocations.

The only really nice examples from that era are the two Greek Impressions listed in the “Photography” section on this site.
Check them out here (Opens in a new window/tab)

Back to the brush 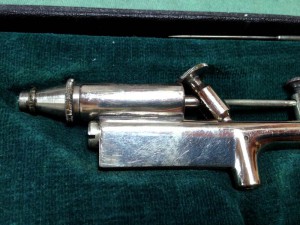 I always loved using it, it has a great weight balance and works smooth and reliable. The needle is also super easy to clean thanks to the design of the handle mechanics.

For really fine stuff I usually prefer the Rotring, Iwata or Paasche, where the dual action comes in really handy especially when spraying close to a non absorbent surface.

Which actually has always been my only negative thing to say about using the Hiekel airbrush: Being a single action gun, it’s very easy to produce spider legs & tears if you don’t accurately adjust the needle stopper ring… Also there’s no perforated air diffuser ring on the tip. Takes some getting used to. Other than this, it is a brilliant piece of  German engineering quality.

Maybe it’s worth adding that the warm coppery tone of the airbrush comes from shooting it in a room with a wooden ceiling on a sunny day. Might look like it’s been polished down to some copper plating, huh? 🙂