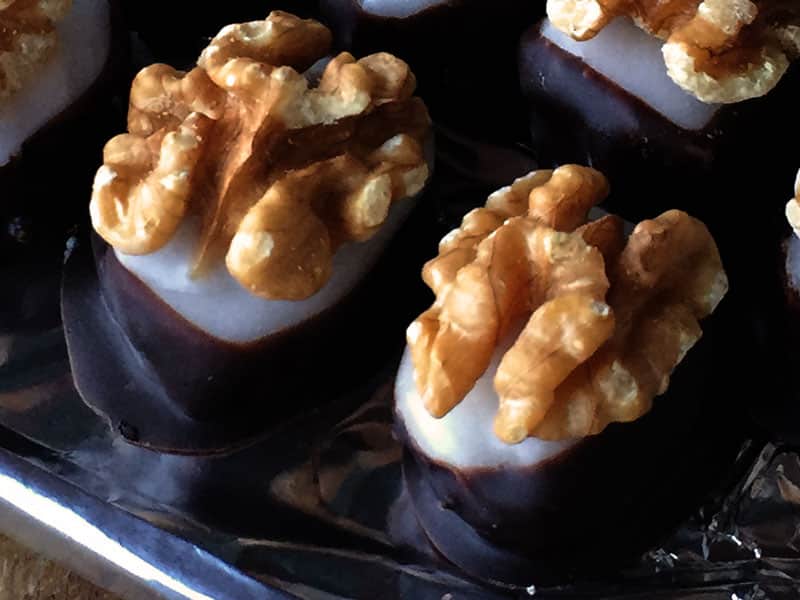 My wife LOVES walnut pralines. There’s just one problem:They’re not available in a regular store. Except if get her a praline box with assorted pralines. Sadly enough, of all the assorted goodness there are usually not more than two walnut pralines included. Not that the other pralines aren’t yummy, they’re just not as yummy as the walnut ones.

As an alternative (a good one, honestly), I found two Chocolatiers in Zurich that make great ones. The thing there is that since I live outside of the Little Big City, I only happen to get near them when I’m traveling to/from work, when I try to get home quickly.

So one day when my wife didn’t feel too well I decided to cheer her up with some fancy homemade stuff. So I went out and bought some marzipan and walnut halves and made them myself. 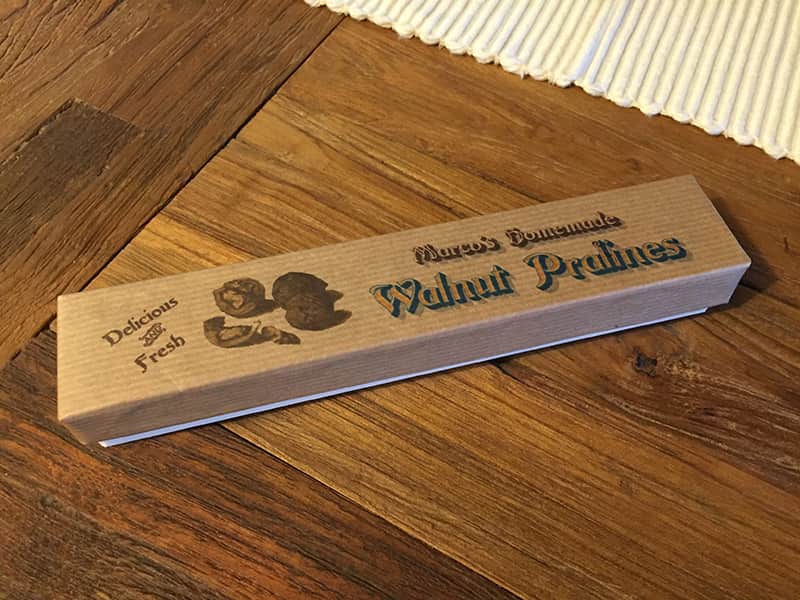 I started with building a small oval cookie cutter from a round Xmas cookie cutter. Then I kneaded the marzipan, adding some rum flavor, rolled out the marzipan to about 8mm and cut a the praline bases. Next I dipped the praline tops in sugar icing (big mistake, more on that later) and planted a whole walnut half on it. Finally I melted some dark chocolate, dipped the bases in it and let them cool on a grid in the fridge. 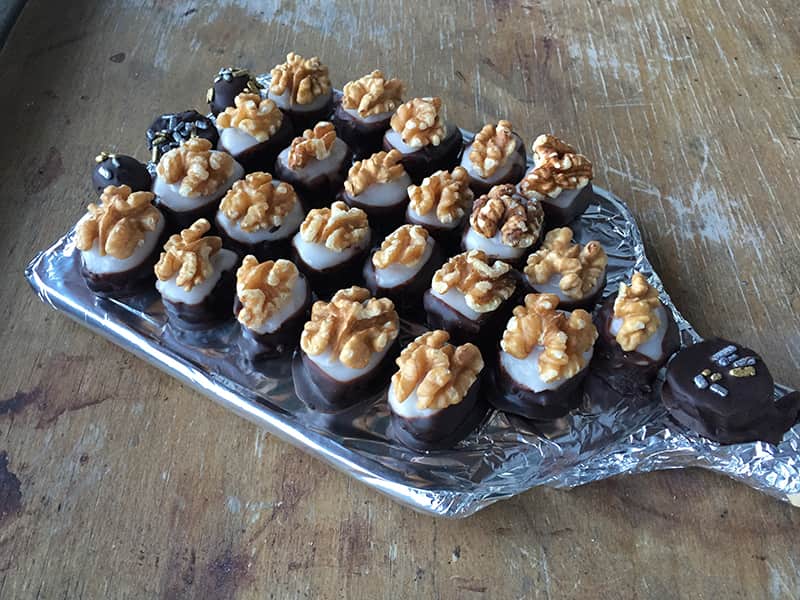 While the stuff cooled down again, I set to make the packaging. To me, that’s half the fun :-).
Since I collect a lot of things (everything might be of good use one day), of course I had small longish praline box saved somewhere, which I measured and then created some graphics for. The graphics were printed onto craft paper, and after some color and ink flow adjustment it looked the way I wanted it. The box was then wrapped with the printed paper, pralines put inside, et voilà, a nice surprise was ready. 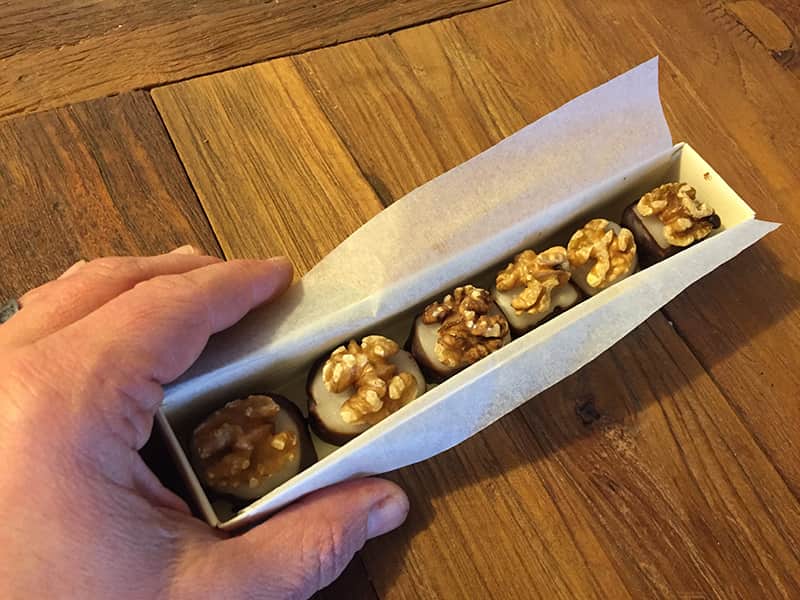 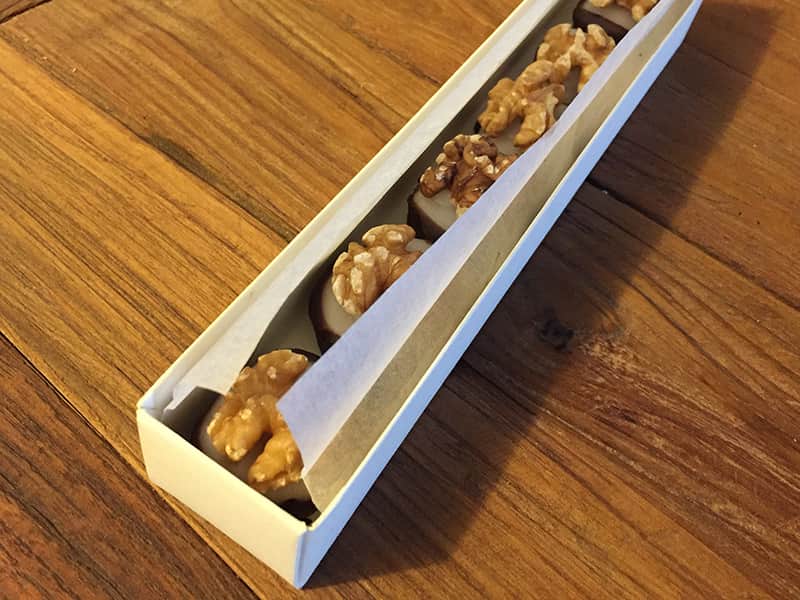 One small thing I didn’t get right though was the white topping. As the real thing has white chocolate on top, which I had forgotten, the pralines were a little on the sweet side. Will do that differently next time. 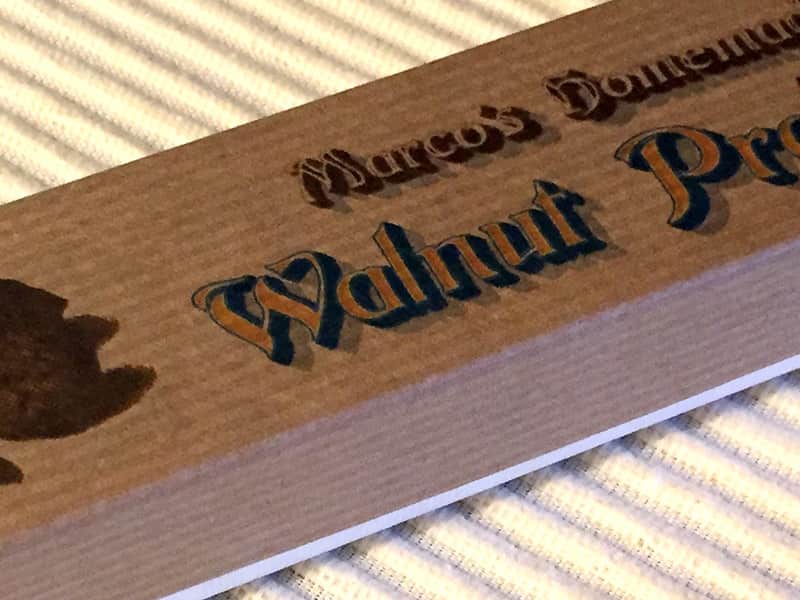 Still it was a nice project and a lot of fun to do. And although they were a little sweetish, they didn’t last very long 🙂