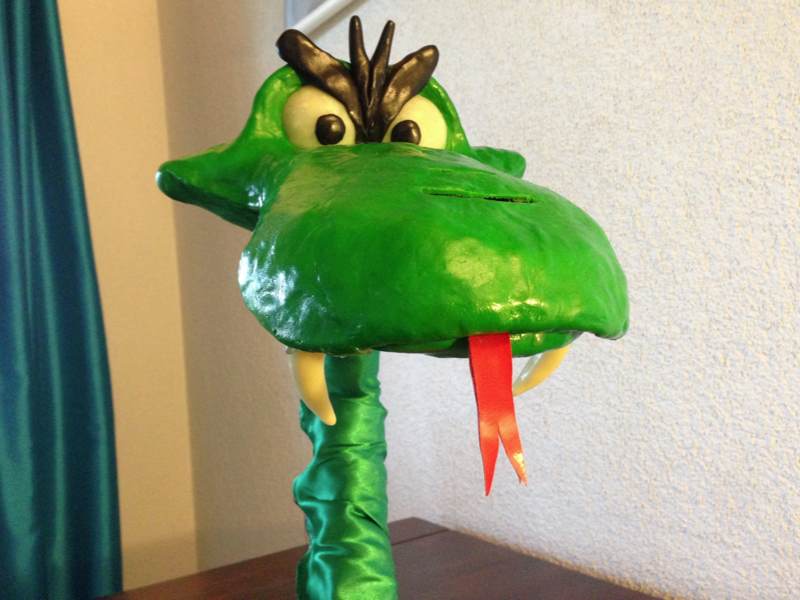 You may know The Snake – it’s my mascot and pet.
Ok, in the meantime there’s come a Golden Retriever into my life, but mascot wise Snake is still number one.

So building a lamp in the form of my fave animal was only a natural next step in my creative explorations.

I made this one some years ago from a halogen desktop lamp with a flexible swan neck as a base.
First I modeled the rough form of the snake head with wires and metal mesh around the top of the lamp. Then I covered the wohle thing with green polymer clay.
The eyes were molded using two ping pong (table tennis) balls by covering them with a layer of white polymer clay and set into the head.

One Challenge was making whole thing to be removable from the lamp so I would be able to cure it in the oven. So after I’ve added the eyebrows I cured the top part of the lamp head for 30 minutes at 265°F (about 130°C).

Next I put the cured head back on the lamp again and started working on the teeth armatures and then built the teeth from glow-in-the-dark polymer clay. That way the teeth will get light from the amp and act as a night light when the lamp is turned off. 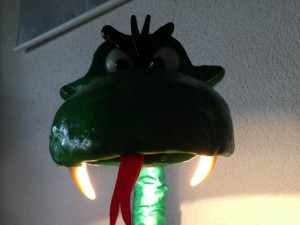 Then I built the lower jaw, which had to be removable too. so I added a couple of nuts to the head’s top so I was able to screw the thing on from below. 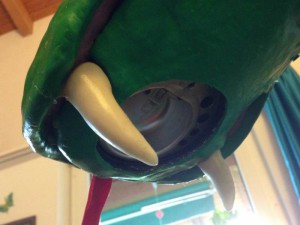 Because the head was finally getting pretty heavy, the flexible neck had to be reinforced with some steel wires which were fixated to the lamp base containing the transformer. The transformer base then got a makeover by building a heavy stand from modeling clay. This made the base heavy enough to support the heavy head even if it was moved out of center.

Finally I made the snake body from cotton wool and green cloth. And the tongue from some red waxed table cloth.

Being a perfectionist, there’s always room for improvement, so one fine day I’ll make a Pro version of this prototype, with a lighter head and a nicer body  than the cloth one.
The plans for this follow up project are already finished mentally, and maybe there’s a small series coming along one day too.

Let me know if you want to stay informed! Maybe that would trigger the production of the Pro Snake Lamp…