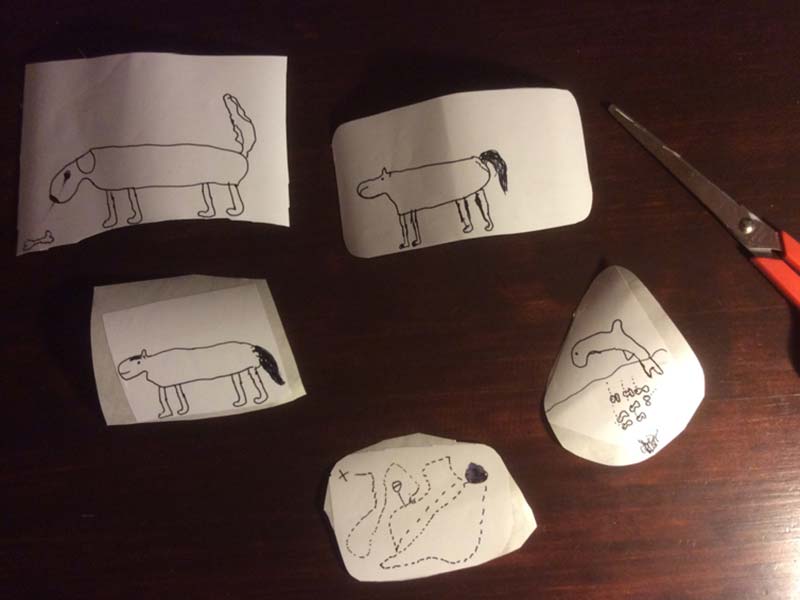 Do you remember when you were a kid and you scribbled some roundish blobs and a grownup who saw it told you how nice that cat looked, while you couldn’t understand what was wrong with that car you just showed him or her?

Those memories came up in me when I read about some artists who turned kid’s drawings of closet-occupying monsters and  other frightening creatures into life-like images. That was a couple of years ago, and in the meantime that wonderful idea regularly bobbed up in me from time to time. “What a great concept” I always thought.

Then some weeks ago I stumbled over an article about a dutch guy who works as an illustrator. He started redrawing his own childhood scribbles with the possibilities and techniques he’s acquired in his career. Hm, another well needed butt kick to get my juices flowing.

Talking about creative ideas, this one also seemed to manifest the concept of ideas not being created by man, but floating all around us and just waiting for the open minded person to pluck them. And if you have that super perfect inspiration you don’t follow through, there’s surely someone else who happens to pluck it. That’s the “I had that idea before too” or “I could have done that as well” moment….

If you’re interested in further investigating the creative mind topic, make sure not to miss Denise Jacob’s hollas found here (opens in new window/tab) and my post about her here.

Don’t search too far, it’s right on your front porch!

Shortly after that I came home to find a couple of drawings my daughter had done with a sharpie on some scrap pieces of white adhesive foil. What else could I do than take a picture of the lot and attempting to “finalize” them? Thinking “I could have done that too” when seeing an article abut a guy doing stuff with his kid’s scribbles was no option this time.

Of course I first asked her if it was all right to fumble with her art, since I knew that to her the pieces were good enough the way they were.

After getting her absolution I started with the horse in the upper right corner, then reworked the dolphin, followed by a dog’s head not shown here (because she’d drawn it on my note pad from work I had lying around while working remotely from my home office). There was also a tweeting birdie on another page of the note pad, which will probably also get the special iPad treatment later.