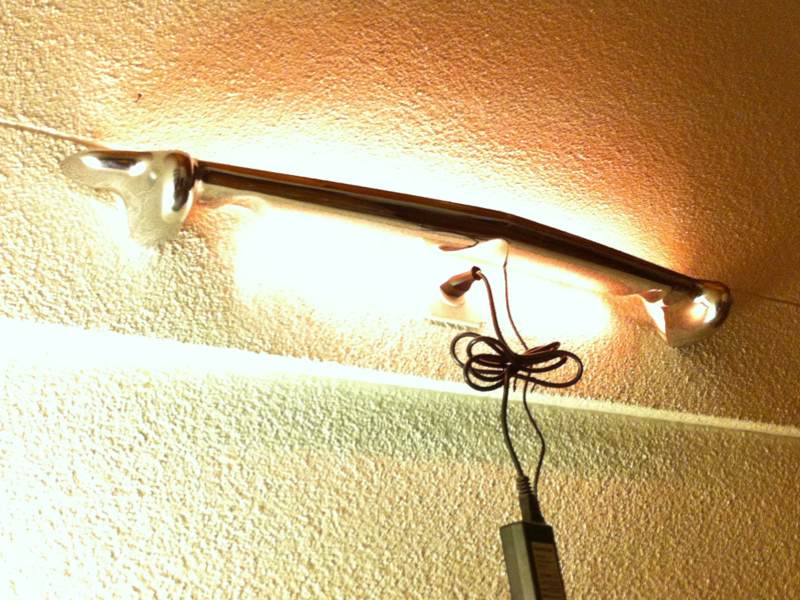 This here is a lamp made from a 1953 Chevrolet bumper bar I had laying around for years. Never bothered to find out if it’s a re-chromed or NOS one, but aways loved the sleek looks of it.

Please ignore the temporary transformer and cable dangling from the lamp which kinda takes away some of the lamp’s elegance. One challenge was finding a transformer powerful enough for my strips and yet still small enough to fit in the bar without obstructing the LEDs. A challenge I obviously didn’t win…

The bar was an accessory one would mount on the front bumper horns of a car, probably the predecessor of today’s SUV bumper bars. Only with a lot more style of course.

In the picture below you can see the accessory bumper bar. It is the short bar mounted on the two bumper horns, just below the three grille bullets on the grille bar. 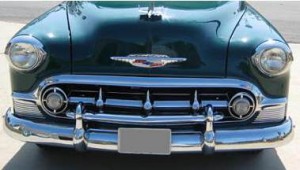 It is roughly 1 meter (40″) wide, has a beautiful chrome finish and looks like new. If you turn it upside down it almost looks like a flying wing from some 50s scifi movie. Stunning (if you’re into that kind of stuff).
In the image below the bar is in its regular position, having the three distinctive “dents” on the vertical bar pointing upwards to make room for the three 53’s grille bullets. 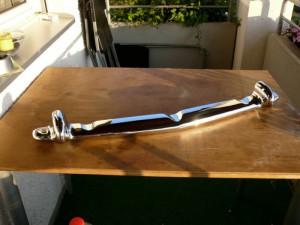 Shine On, You Crazy Bumper

The lighting was done using high density LED strips. The strips are mounted  in multiple rows, on both upper and lower side of a tiltable aluminum support. This way they also spread some light on the wall below the bar, which leads to the beautiful reflections in the chrome visible in the images here. Also the angle of the light is adjustable easily thanks to the tiltable support.
Thanks to the RGB LED strip the lamp works  great as a color adaptable background light.

Maybe the idea of going with RGB LEDs also wasn’t sooo great after all, I have a feeling that they’d be a lot brighter just being warm white strips.
Initially the lamp was meant to be a replacement for a standing 300W halogen flood light. But it seems as although the wattage and lumen numbers of the LEDs sum up quite nicely, it’s still on the darker side of what I aimed for.

Maybe the distance to the wall is too close. Or maybe the wall I mounted it to is also a little high (it’s roughly 6m or 20ft high). The light doesn’t get a big chance to be caught by it, and therefore the lamp only works in darker settings.
Great in the evenings while sipping a glass of red with my wife, even great for working on the Mac, also to watch TV by.

What I really needed though was a dinner table lamp, a lamp bright enough to be able to see the food you’re forking up from your plate… 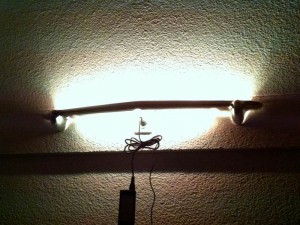 So for now the lamp is on hold again, as I’m searching for better ways of affordable, powerful and and sleek LED lighting, hopefully without being forced to use a transformer. I just recently found some LED bars which are looking pretty promising. But then they have a heat issue. And are quite bulky. Hmm..